I've been very inactive on my blog this summer.  I was really injured in early June, and am only now feeling like I'm recovering.


My mood was low, and my energy followed suit.  Through it all my solice was in gaming, truly that most pleasant of distractions.  Over the course of the summer I've found my second true love rekindled -- gaming the 18th century.

I've made trips east to be with my dear friends in Appleton and Milwaukee, and played again with the ATF group.

Still playing Impetus, and adding as much Maurice into the mix as I can.  I'm looking forward to catching you up with posts soon.  TAFN
Posted by Brent at 6:35 AM 7 comments:

Jack brought his Byzantines over on Mothers Day.  We'd hoped to have a game that afternoon, but the rest of the guys were occupied with more important matters.  So Jack and I spread the army out, shared conversation, and took pictures of the arrayed forces.

The army is all painted and glued to the bases, but much is still not flocked.  However, the formed infantry was complete, and so will be the feature of this photo study.  First we'll focus on the command stands Jack has completed, the emperor and a general.

The main line infantry of the Byzantines were the Skoutatoi, close order heavy foot (FP in Impetus) armed with long spear, and backed up by a stand of supporting archers.  These are a deep unit in Impetus for the Nikephorian and Konstantinian armies, or are separate units in in Comnenan armies. 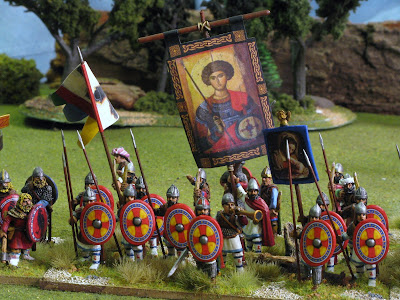 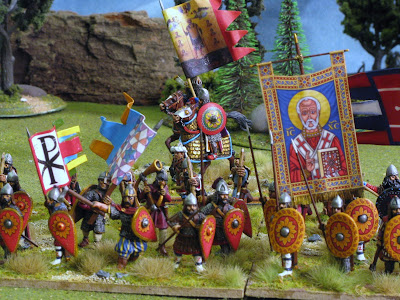 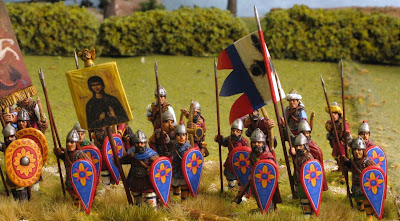 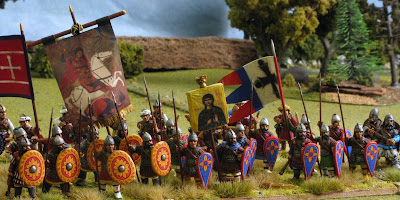 The standards are both Little Big Man Design banners and art-work Jack found on the internet or in other places.  The LBMS pieces are the more vibrantly colored ones, but I think the combination of sources works well.  This is a well arrayed army.

The Varangians are the other component of the formed infantry.  These are mercenaries from northern Europe and Russian -- originally they were primarily Swedes and Russ, although many other adventurers joined their ranks.  After the Norman conquest of England many huscarls joined the Varangian ranks.

The cavalry and light infantry will be featured in a future post.

Jack's work is very nice -- FYI he does do commission work.

One of my favorite aspects of Impetus is the creativity you can show on the bases. My friend Jack Ladd is a great modeller, and is always thinking about how he can use figures he finds out and about in the army he is currently modelling.  Another example of Jack's creative use of figures and materials can be seen in the Irish diorama featured in one of my earlier blog posts - "Who will you send against me now!"

Jack's Byzantine army has a hard contingent of Varagians.  One day Jack saw a group of crows for sale as part of a fantasy line at the Source, a local game store in Roseville, Minnesota.  He thought he could incorporate it in his Byzantine Varaginians --  here is the result.

I regret I didn't get shots from more angles.  There is a decayed body beneath the flight of crows, the varagians next to the crows are looking at them, and the officer is facing them, and appealing to the god Odin.

Another diorama Jack made as part of the army is of the leader, George Maniakes - Strategos.  George is pictured in the act of charging a Syrian foe, caught at the moment his stallion is bowling over the Syrian's mare. 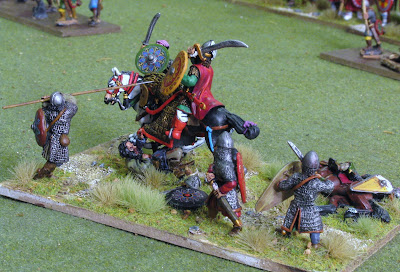 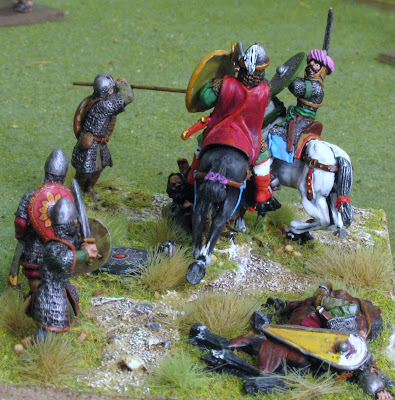 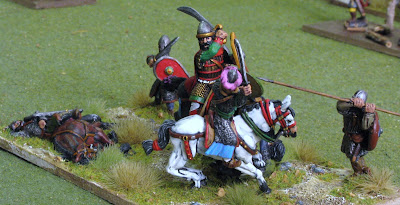 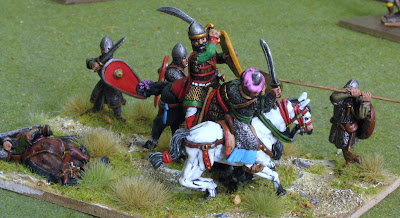 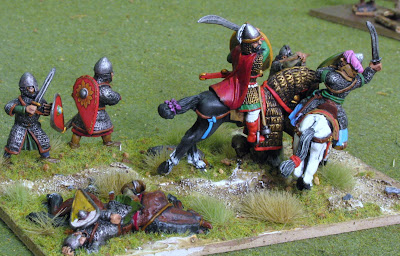 This piece is outstanding.  The more you study it, the more you see.  I'm confident we'll see more of Jack's dioramas in for future armies.
Posted by Brent at 7:28 PM 11 comments:

Jim S. brought his Sassinids over in April, and played a 500 point Impetus game against my Fatimid's.  I took pictures of the game -- I don't enjoy writing AARs (I was there, after all), but I want to introduce Jim's Sassanids. We are playing a big group game this Sunday, May 20, pitting Jim's Sassinids against Jack's Byzantines.  That will be spetacular game, and I really look forward to it!

So here we go on the Sassinid teaser:
First are the Pushtigbhan, cataphracts that form the fist of the army.  Jim's are very well painted, and some future close-ups will show just how painted they are.

Next up are the Savaran.  These are medium cavalry in Impetus, and quite good horse archers.  They can soften an opponent up with missile fire, potentially evade when charged, and then charge home when the enemy is ready to break. 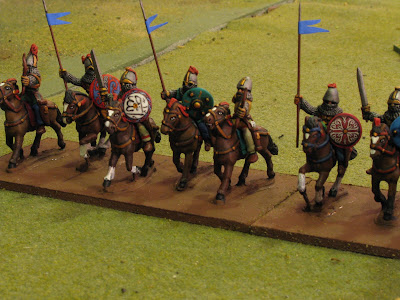 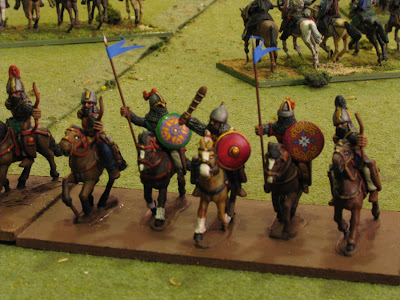 Last, but certainly not least, are the elephants.  These are hazardous to enemy cavalry, but vulnerable to missile fire.  The elephants are accompanied by a skirmisher screen of slingers to help protect them from opposing missile fire.

I trust that I will have the opportunity to take more pictures of Jim's Sassanids, and I will gladly share them.  That's all for now!﻿
Posted by Brent at 7:08 PM 4 comments:

I've intended to do a terrain cloth for my 28mm games for some time, but haven't gotten around to it.  The cloth I desired was modeled after an approach Jeff Knudsen uses, and Elliot James has also used.  I've played on these clothes in many ATF (alcohol, tobacco and firearms) games, and they are wonderful.  These games are played with 10mm or 15mm figures, and I wondered if this mehod would transfer to 28mm well.  I highly recommend it for the smaller scales, it looks great!

A thread on TMP (http://theminiaturespage.com/boards/msg.mv?id=263114) started with an excellent tutorial helped me decide to try this method to make a cloth for my upcoming Little Wars game.

My cloth was a learning experience, but I am pleased with it.  I made a 6' by 9' peice, with a river along the portion of one edge.  There is a road intersection, with clearly cultivated areas then other areas.  It  was a weekend project.

I used the following materials.  A 6x10' painting canvas cloth, medium weight; ten or twelve DAP dynaflex 230 brown premium indoor / outdoor sealant; and lots of assorted flock.  After I applied the flock, I covered the new area with wax paper and went over it with a rolling pin.  I do not have a comparison to this method, but the flock is certainly integrated with the caulk.  I was suprised at the amount of flocking material required!  So this was not cheap, but certainly different than a standard cloth.

What I like about it is the clarity of the ground -- terrain features are clearly delineated with a minimum of effort, and the way my bases go with it.  Since I used flock on both the game matt and my figures bases they are better integrated than with my standard green gaming matt.

I am looking forward to using it in convention games, and comparing it to other matts used.
Posted by Brent at 8:21 AM 15 comments:

Little Wars is coming up quick, and for me, Impetus is it's name!!

I'm  looking forward to running a Vikings invading Ireland scenario Friday morning.  A lot of effort went into balancing out what is a tough match-up for the Irish in a straight tournament game.  Here are some teaser shots --

There will also be two other Impetus games run, each by a different group.  So three groups are running games this year.  There will be a game of Adrianople, and one set in Japan.

I'm runninng an Impetus Open Saturday night, and continuing open gaming Sunday. I reserved space for the Open Saturday evening from 6 pm until 2 am. Several friends have commented on the hours, so I want to clarify this.

These open gaming times are to encourage regional players to meet each other and have fun gaming some small games. The Saturday Open will include awards for the best painted army and the best player. These awards will be presented between 10:30 and 11. I trust a couple of games will have been played by everyone interested by then.

I reserved this time so that interested people could play until they closed the doors on 'em. There was never any intention that you had to play the entire 8 hours!! But for the die-hard enthusiasts, you can.

Sunday will be very relaxed -- we have space for the day and can do whatever seems appropriate for the people around.  Replay some of the earlier games, play a group game, have some learning games, or matches against other Impetus fans!  If you're curious about Impetus, you have lots of opportunities to learn more.

I'm looking forward to Little Wars, which is the regional gamers mixer.  There will be friends from all over the region there, and I'm sure that I will make new friends this year.
Posted by Brent at 7:40 AM 4 comments:

Jack Ladd is another St. Paul Irregulars (SPI) member working on 28mm Impetus armies.  Jack is building a Byzantine army from Volume 15 army lists found in Impetus Supplement 2.  I believe it will be able to be either Nikephorian or Konstantinian.  The majority of the army are Crusader figures.  Jack has some of his army painted and on bases, but without the basework.  Jack's shared his WIP before a game -- so, here's some more visual stimulation!

First up are the Varangians.  The shields and banners are primarily provided by Little Big Man, but I believe the Madonna and Child is a postage stamp.  (Jack never forgets his projects!) 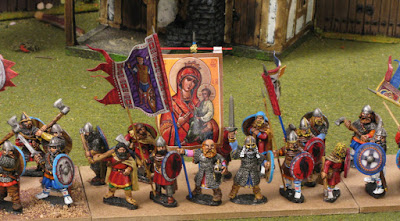 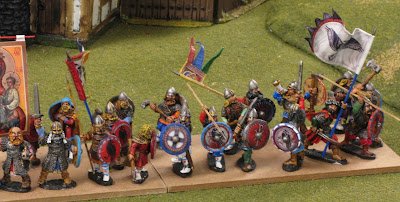 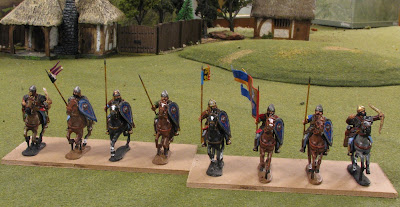 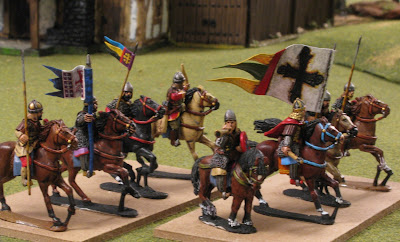 Jack also brought some personality figures he plans to use as game markers.  These include the Gripping Beast Harald Hardrada figure.  Harald's the guy who absolutely towers over the rest! 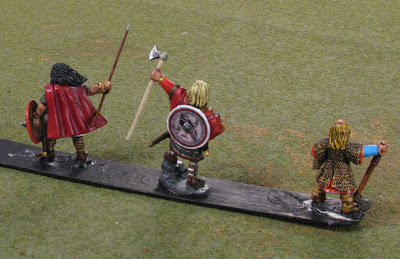 The tiny guy with the axe resting on the ground is a Crusader figure, which is a big 28.  The others are Gripping Beasts, so these beasties are really large personality figures.  For Harald, that's totally appropriate.

We'll leave Jack's Byzzies in Progress with a final view of the Varangians in a nice setting . . . 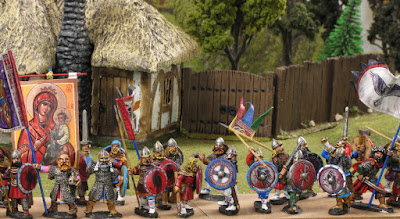 For the past several weeks I've been working on my 2012 LIttle Wars game, the Vikings in Ireland.  I am working out the forces, terrain, and objectives.  Some obstacles have been encountered, but shall be overcome!  More on this task will follow in the days ahead.

Twin Cities Recon -- Saturday, August, 2012
Currently unplanned, but I will update this information closer to the event.

Last Square, Madison, Wisconsin. Summer or Fall, 2012
We discussed this at Little Wars -- I hope we can get folks from the Twin Cities, Illinois, and Wisconsin for a fun filled day of Impetus.

Game Day, Fargo, North Dakota. Summer or Fall, 2012
We discussed this at Little Wars -- I hope we can get folks from the Twin Cities , North Dakota and Winnipeg for a friendly get together.

SPI Thursday @ Stokes on Juliet -- Neil's Normans got some Franks to fight Romans, or Irish, or . . . .? Details will follow.

Next game at my house is some Sunday soon

Brent
I'm a fifty-something gent, who started gaming back in the early 70's. I have focused at different times on rule-writing, gaming, group building, and painting. I am currently loving painting, after taking a decade break! Another long-time love is singing gospel music -- I started in the late 80's, and haven't stopped yet. Singing has great meaning to me, and touches all parts of me - body, soul, and mind. I hope you enjoy Of Metal Men